>I know that this is way overdue. I have been really exhausted and having a tough time getting back into the swing of things, but here I am with a few moments to spare!

First of all, there is a small pre-story to our Montana Trip. For a while there we weren’t sure we were going to make it. We had planned for months that we would be renting a minivan and making the trip with Cory’s parents. Perfect plan, but then Grandma Sandi took a spill on the sidewalk on the Monday before our trip and ended up with a dislocated elbow and ulna that was broken to two places! She was sent to the University Hospital down here in Iowa City and was told that surgery would be necessary, and they couldn’t tell her when she would have the surgery and when following the surgery she would be discharged. Well, Sandi was quite adamant that she not miss this trip and she must have made an impression on her surgeon because on Wednesday morning she had surgery, and then on Thursday at about 12:30 we pulled out of North Liberty in our Blue Van Car(BVC) (named by Leila, and she was right…it was a blue van) with strict orders to stop every two hours for Grandma Sandi to run around the BVC. The rental car was an interesting experience…it was a Sienna, which is in my opinion a dream minivan…if such a thing exists. The BVC served us well, but it had no bells and whistles and until we were able to settle in, it really smelled like a hotel room. I was happy to put the next 2800 miles on that car and not our Equinox.
Day one of driving had us stopping in West Des Moines, just north of Council Bluffs and then in Sioux Falls SD where I turned over the keys to Cory just in time for him to get to drive into the setting sun–yep, that is the kind of wife I am!
Here is Leila running off some steam in a Wendy’s in Sioux Falls. Yes, I let my two year old run around in public in her diaper. She also reacts to any paper bag entering the car with, “Fries! Fries!” Nobody is perfect.

At this point we are driving through Sioux Falls and Cory mentions that we have about 6 more hours to go until we reach our Day 1 destination of Rapid City. Shoot me now. Luckily it got dark, I got sleepy and no one had to listen to me complain (for very long anyway) until we found ourselves rolling into Rapid City at about Midnight after the hour we gained by switching time zones.
We stuck Leila in bed between us in our hotel room and we all slept hard until morning. The next morning was some planned sight seeing. Yes, it made it take that much longer to get to Red Lodge, but I really wanted to make the most of it and see what there was to see. So…Keystone South Dakota…I don’t really know what to say, or wait I do- What a tourist trap! The streets were lined with stores that screamed, “We have crap!!! Lots of crap!” We drove on through and up to Mt. Rushmore. I had never been to Mt. Rushmore before so I thought it was pretty cool. As we drove up towards the monument I was struck by how small it seemed. I guess when you only see it in pictures, people tend to zoom in. The faces themselves seemed to kind of blend into all of the huge rock formations, but as we drove all the way up to the monument, they started to look bigger to me. Leila also enjoyed the “faces in the rocks.” 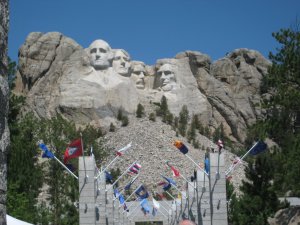 Next was Crazy Horse. I loved that, I thought the story behind it was really interesting and I like Indian History and Art so it was right up my alley. This monument will be amazing when it is complete!

After Crazy Horse we were ready to hit the open road. We drove the Black Hills, which were pretty. Two observations: first of all, the rocky hills in South Dakota sparkle (very cool) and second, the trees grow so freaking close together it is no wonder that a forest fire can cause such long range damage! We saw a lot of forest fire damage on our trip, very sad. The terrain was beautiful in South Dakota, but the tourist trap towns made it seem like hickville USA. Oh well, on to Red Lodge! We drove through part of Wyoming on our way to Red Lodge and hit our destination in time to order a pizza, eat it and pass out for the night. We were all very glad to be rid of the BVC for a while!

Saturday in Red Lodge…we woke up and took a walk downtown. It was absolutely beautiful! It felt like a fall day in Iowa. Leila and I had some chocolate chip cookies from the farmers market and checked out a bunch of cute shops

Saturday afternoon was Cory’s niece Sarah’s wedding…this was the reason for the trip west. The wedding was at their family cabin in Red Lodge and everything was beautiful! It was a very nicely done, casual yet elegant wedding. Leila had a great time! The Cabin was surrounded by water. Though there is normally a small stream that runs next to the cabin, the surprise of the summer was the wide rushing stream that had developed from the snow melting and running down the nearby beartooth mountains! Cory’s brother Eric spent the day before his daughters wedding knee deep in freezing cold water building a makeshift scaffolding bridge for the guests to use to get to the wedding. What an adventure! Leila didn’t think they needed a bridge, she really just wanted to jump right into that water! 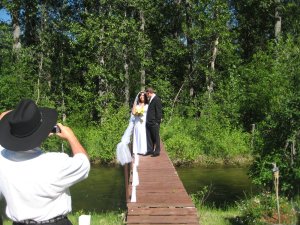 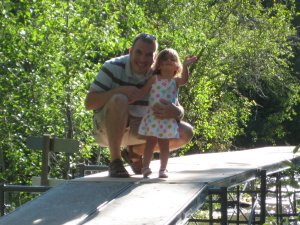 Oh, And Cory got to meet his brother Earl for the first time ever. Crazy huh? He was a very nice guy and thought it was pretty evident that he was a Coobs 🙂
Leila and I didn’t last too long at the wedding…with water on all sides and Leila being a little fish, I was very nervous. It took a lot of energy to chase her everywhere so we made a fairly early exit back to the hotel.

We spent the next day hanging out in Red Lodge with Cory’s family and walking around town a bit more…just relaxing on our last day of leisure before were back on the road.

Monday morning we packed up the BVC and prepared ourselves for the next few viewings of Ratatouille. I am so glad that we bought that mini DVD player to keep Leila happy but the big drawbacks were; 1. She would barely look up to see all of the cool things we were trying to point out to her on the road and 2. She really needs to expand her horizons and try some different movies. I have seen Ratatouille more times then I care to count.
We have so many beautiful scenery pictures from our first day on the road, but I will only post a couple since this post is already a photo overload! We first crossed the beartooth pass through the mountains. That was AWESOME! Leila got to play in the snow, was saw some absolutely beautiful sites and we reached the peak of 11,000 ft above sea level. It was a great experience. Cory and I enjoying stopping along the road to explore the terrain every once in a while and we were having a great time. 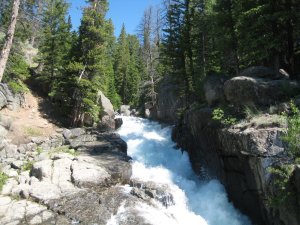 Once we were over the pass and back in Wyoming we entered Yellowstone National Park. That was also very cool! We continued to make all kinds of stops and checked out a lot of what Yellowstone had to offer, well, as much as we could in a half day. We saw Old Faithful, though we didn’t see it erupt. That was ok with me though, I preferred the smaller Geysers where you could see the beautiful blue water bubbling up and the clay pots (I think that is what it was called?) Anyway, there were a lot of things in Yellowstone that I will probably never see anywhere else. Including the brochure that they handed to us when we drove it. It had a picture of a man being attacked by a buffalo. I think they got their point across…we stayed in the BVC while taking pictures of the buffalo! 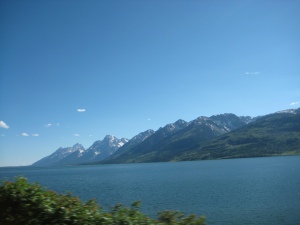 That last picture is from the Grand Tetons National Park. By the time we got to that park we were realizing how much further we had to drive before we reached our overnight destination of Laramie WY and were starting to feel very wore out and discouraged. It was a beautiful park, but by the time we got there, we didn’t really care. That last picture was taken from the moving BVC, if that says anything about the pace of trip and how it changed as the day wore on! 🙂

We did manage to make it Laramie at about 1:00 in the morning. Again we crashed for the night and the morning came too early! We were slow to get moving our of Laramie and we were wondering if we had set our goal too high to make it back home by the end of Tuesday, but my desire to sleep in my own bed really helped push me! We drove the Nebraska, snoozefest. Here was the highlight of day two of the drive home:

So we continued on and we finally rolled into North Liberty at about 11:30, and not a moment too soon! We were so glad to be home, but wow! look at all of the places we saw!

The next morning my mom returned Zoey to us (they were dog sitting). Unfortunately Zoey became the next victim of the Ulna curse. In one of her small dog syndrome fits she had attacked Molly, her aunt who happens to outweigh her almost 4 to 1. So our adventure began with a broken bone and ended with one. 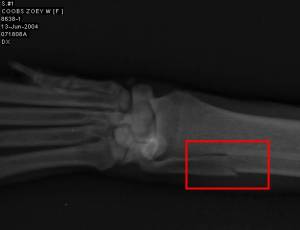 Oh, and Zoey is doing fine…she managed to catch a sparrow on three legs, and with the painkillers she got from the vet, life seems to be dandy for her.

There you go, and I am not about to proofread this monster! 🙂

This entry was posted in Uncategorized. Bookmark the permalink.